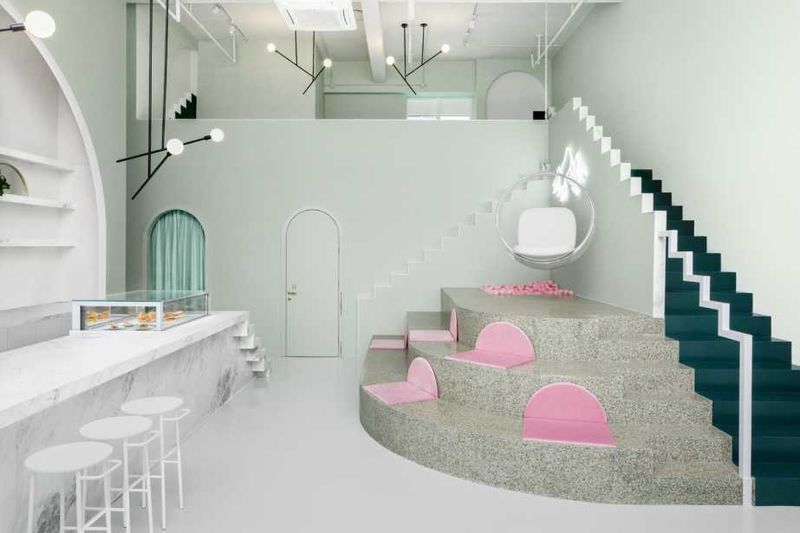 Justin Lam — January 5, 2018 — Art & Design
References: blouinartinfo & fubiz.net
Share on Facebook Share on Twitter Share on LinkedIn Share on Pinterest
The Budapest Café recently opened its doors in Chengdu, China and while the food and drinks are impressive, a significant amount of praise has been focused on the Wes Anderson style of design done by the Melbourne based interior design studio Biasol. As the cafe's name would indicate, the design is heavily influenced by the films of Wes Anderson, in particular his 2014 film The Grand Budapest Hotel. The design incorporates the almost magical quality of Anderson's films and was meticulously done by Biasol to match aesthetic and atmosphere.

Stepping into the Budapest Café instantly evokes the feeling of Anderson's films. The quirky set designs, vivid pastel color palette, and proscenium arches blend together beautifully and show distinct evidence of Anderson's influence on the design. The cafe is built to present a sense of grandeur thanks to the arches, layers, and changes in elevation. The cafe carries a whimsical and playful nature with its pink ball pool, Eero Aarnio Bubble chair, and neon signage. In using the style of Wes Anderson, Briasol has achieved a distinct design feat that brings patrons into an engaging and playful world that is known, but rarely ever experienced in such a beautiful way.
6.2
Score
Popularity
Activity
Freshness
View Innovation Webinars