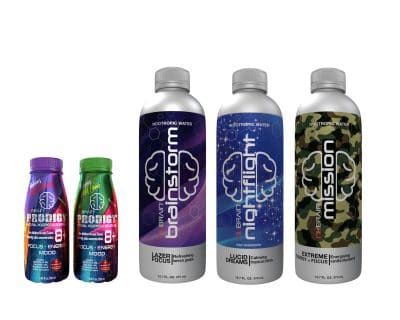 Michael Hemsworth — May 17, 2020 — Lifestyle
References: teslanootropis & bevnet
Share on Facebook Share on Twitter Share on LinkedIn Share on Pinterest
Tesla Nootropics has announced three new refreshment options for consumers who are looking for a way to enhance their lifestyle day or night. The new drinks include the Nubrain Brainstorm, Nubrain Nightflight, Nubrain Mission and Nubrain Prodigy that are each focused on delivering mental support in two different ways. The Nubrain Brainstorm will help with providing natural energy and focus, while the Nubrain Nightflight will aid with lucid dreaming and Nubrain Mission with help with fortified, caffeine-free support. The Nubrain Prodigy drinks are the first of their kind for children to let them enjoy the benefits of nootropic products in a drink that's just for them.

Co-Founder of Tesla Nootropics Angela Kahn spoke on the new drinks saying, "Our motto is ‘value through innovation’. This concept and formula was devised in 2014, way before anyone else, so our claim that we are ‘the first real nootropic beverage’ stands absolutely true. We feel that the energy drink market has had it’s turn and it is now time for the next generation of drinks. Drinks that help the brain and support people achieve more everyday.”
4.6
Score
Popularity
Activity
Freshness
Attend Future Festival Virtual