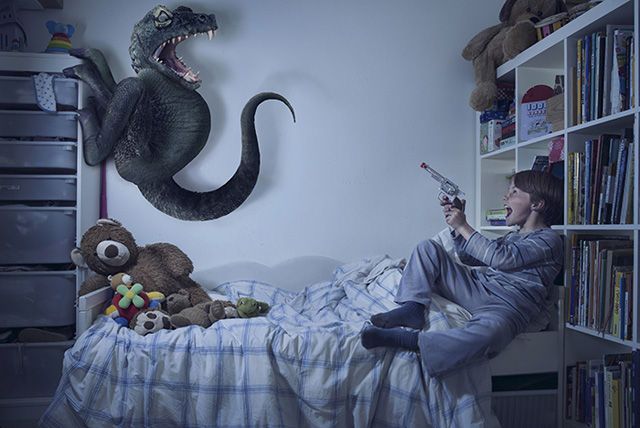 Meghan Young — July 11, 2014 — Fashion
References: laurefauvel & fubiz.net
Share on Facebook Share on Twitter Share on LinkedIn Share on Pinterest
Terror by Laure Fauvel, a photographer based in France, is an adorable photo series that shows children getting a little revenge on their innocent inner fears. Instead of succumbing to their active imaginations and crying out for their moms or dads, these children are captured battling bedroom monsters. In turn, it is these nighttime creatures that look on in absolute fear.

Utterly playful, Terror by Laure Fauvel is something that will entertain both adults and children. In fact, the latter could probably benefit from such images. It essentially illustrates that they can easily overcome their fears if they so choose to. Aside from the creative and clever context, the images themselves are expertly executed and so too the faux monsters. It is hard to tell if they were digitally added.
6.8
Score
Popularity
Activity
Freshness
View Innovation Webinars