Exhibitions for Youth Artists
Next
Set of
Related
Ideas 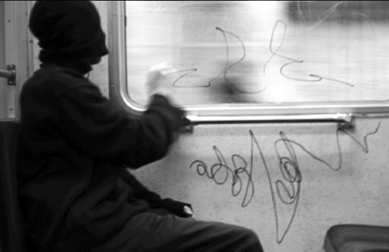 The Swedish graffiti painter and modern art graduate NUG has sent Swedish media into a rage following his graduate showing of a film where he literally mutilates a public train service. Not only does an entire car of the train get brutalized by his territorial pissing, but also the walls, corridors and floor of the train station.

The public is shocked and the cultural minister is enraged; now the art academy who has spurned this young ninja-bombing-graf-artist must pay for the damages and has lost school funding as a cause of NUG’s artistic visions. Wow, it is never an easy world. What to think about all this?

Graffiti For Education
London College of Communication Wants You To Draw