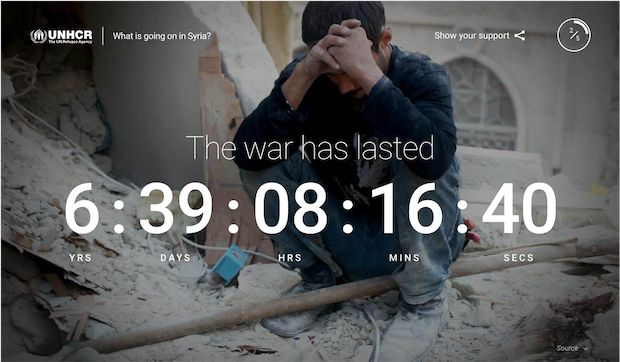 Amelia Roblin — May 22, 2017 — Marketing
References: searchingforsyria.org & theverge
Share on Facebook Share on Twitter Share on LinkedIn Share on Pinterest
Despite the media coverage across a full spectrum of channels and platforms, there is insufficient education regarding the Syrian refugee crisis outside of the Middle East. Where people may understand the gist of the current physical state of the Arab country's war-torn cities and persecuted people, the world has much to learn about how the social and political arrest broke out, and even to appreciate the very different Syria of less than one decade ago.

Together, Google and the United Nations High Commissioner for Refugees have collaborated on an interactive website, designed to convey Syria's story. It succeeds most simply by answering the five most-asked questions about the Syrian refugee crisis through animated infographics and statistics, personal stories of refugees, impactful before and after photography, and a live clock counting up from the start of the current war. It's accessible online campaigns such as this that will better inform the public and better facilitate lifesaving donations to charity for those who have been injured and displaced.
4.8
Score
Popularity
Activity
Freshness
Attend Future Festival