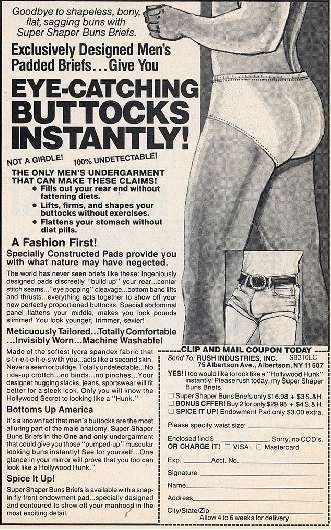 The ad for the padded briefs promises, an "Eye-catching buttocks instantly" and features images of both a tightie-whitie clad cartoon man and an illustration of another guy in ultra-tiny, retro short-shorts!

"It's a known fact that men's buttocks are the most alluring part of the male anatomy," the ad reads. "Super Shaper Buns Briefs in the One and only undergarment that could give you those 'pumped-up' muscular looking buns instantly! See for yourself... One glance in the mirror will prove that you too can look like a Hollywood Hunk."

Guys, please realize this will put ladies through the same disappointment you endure when you find out her bra was padded!

The Aussie Bum Wondercup stuffed in the front, and the Super Shaper Buns Briefs no the back; now they just need one that beefs up both!