Getting Naughty With Vegetables 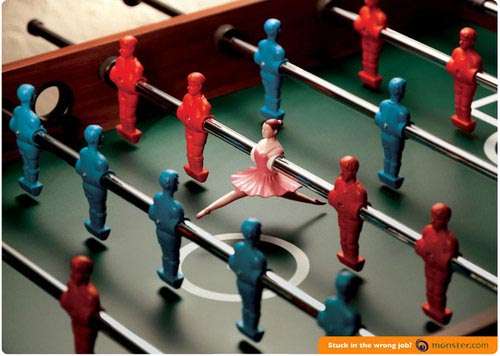 This Super Bowl ad’s first shot trails from outside an office building in New York City, into a CEO office decked in, picture it, dark wood, built-in book cases, expensive leather sofas, and, the cherry atop, a terrifically ostentatious moose head hung behind the desk, which, by the way, is completely devoid of any papers or computer that would signify that “actual work” is taking place. Sitting there, with feet slung carelessly on top of his desk, “The Boss” reads his newspaper, completely calm and apparently left with not much to do.

Then the camera pans through the wall, so that it reveals that the moose head does not end at the wall, but extends through to the other side of the wall to include the lower half of its body, from the neck onwards. The bottom half of the moose straddles the desk of “The Employee,” on which sits a computer, copier, printer and paperwork. Sitting in his bland white, not so pimpin’ office, “The Employee” is stuck with a smelly moose ass in his face, ready, no doubt, to be shat on with a largess laden load… aka the grunt work.

Man, does this commercial not speak directly to over 90% of the American population? Monster.com seems to be saying: ‘Man, F---The Man. But choose us to help you find a new and better job… in which you can further curse The Man.’

Hey, look on the bright side, maybe next time it will be a rat’s ass.