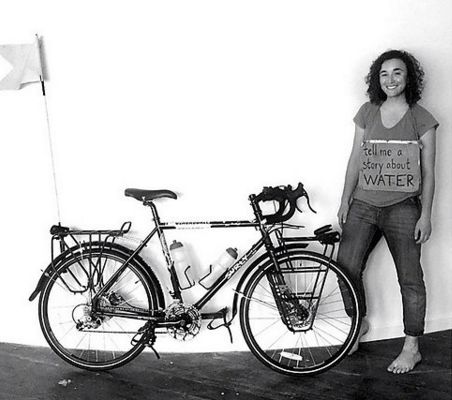 This Cyclist is Collecting Stories About Climate Change

Katherine Pendrill — January 21, 2016 — Eco
References: onebikeoneyear.wordpress & magazine.good.is
Devi Lockwood is a 23-year-old activist who is on a mission to create environmental change by collecting stories about climate change. What makes Lockwood's journey so unique is that she is collecting these stories via bike.

The idea behind the campaign began when Lockwood participated in the People’s Climate March in New York City in 2014. She decided to keep the momentum going by starting her own climate change campaign. Thus far, she has cycled across the US, Tuvalu, Fiji, New Zealand and Australia collecting stories about climate change along the way. She has already gathered 450 stories and the goal is to eventually collect 1,001.

While all of the stories are not available publicly at this time, Lockwood eventually hopes to create a digital map of her tip with audio recording of each and every story. As Lockwood explains, "If this archive can be a small way of getting people talking about water and climate change within their own communities, then I hope I’ve done something worthwhile."
4.2
Score
Popularity
Activity
Freshness