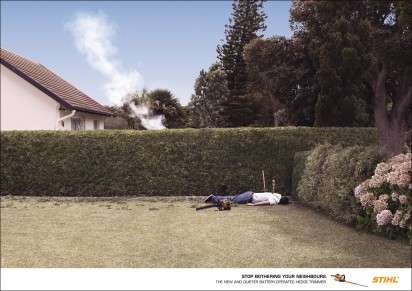 The Stihl Viking Ads Seem to Have a Rather Violent Ending

Meghan Young — May 10, 2011 — Marketing
References: publicis & ibelieveinadv
Neighbors can often be considered an extension of your family due to the love/hate relationship that one often experiences with them; however, the Stihl Viking ad campaign seems to focus on the hate rather than the love. As much as people want their street to look well-groomed, the noise that can ensue during lawn grooming is often even more frustrating and distracting than a mangy aesthetic.

The Stihl Viking ad campaign boasts a new and quieter, battery-operated hedge trimmer that will help you 'stop bothering your neighbors' and avoid a possibly messy and violent ending.