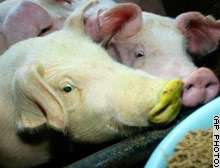 "There are partially fluorescent green pigs elsewhere, but ours are the only ones in the world that are green from inside out. Even their hearts and internal organs are green," Wu said on Thursday.

31 Examples of Bacon Love
Proving That Pork Passions Are Everywhere