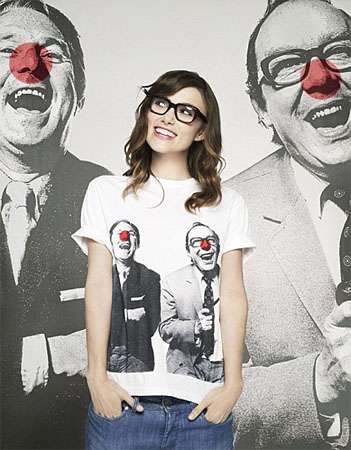 Bianca — February 5, 2009 — Fashion
References: comicrelief & catwalkqueen
Share on Facebook Share on Twitter Share on LinkedIn Share on Pinterest
Stella McCartney proves she doesn’t mind clowning around a little when it comes to supporting a good cause. These limited edition Stella McCartney t-shirts feature an iconic black and white image of David Bailey’s photo of comedic duo Morecambe & Wise, both of which have red blotches over their faces that looked like clown noses. She designed similar shirts featuring her dad Paul's band, The Beatles, as well as a rabbit version for kids.

The £9.99 (about $14.50 US) shirts were designed to support ‘Comic Relief’ and have already captured the interest and support of McCartney’s friends including Claudia Schiffer, Gwyneth Paltrow and Keira Knightley (who is seen wearing the shirt in the gallery.)

“Comic Relief has inspired the nation to have a laugh while raising cash to help change lives,” the organization says. “Our vision is a just world, free from poverty.”

Comic Relief has proclaimed Friday, March 13 “Red Nose Day 2009;.” They are also counting down to “The BT Red Nose Climb” which involves celebrities who are climbing Mt. Kilimanjaro in support of the charity. Volunteers include Cheryl Cole, Kimberley Wals of Girls Aloud and Gary Barlow and Ronan Keating among five other stars.
2.9
Score
Popularity
Activity
Freshness
Get the 2021 Trend Report FREE