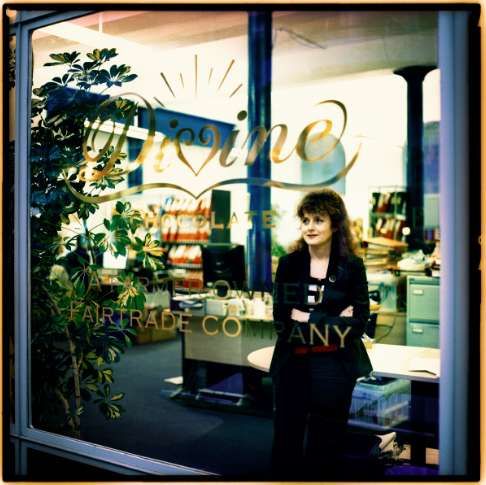 Tiana Reid — August 24, 2011 — Social Good
References: divinechocolate & facebook
Share on Facebook Share on Twitter Share on LinkedIn Share on Pinterest
As a purveyor of all things good (and good to eat), Divine Chocolate has been featured a few times on Trend Hunter but this is our first interview with someone behind the brand: Sophi Tranchell. With the launch of SocialBusiness.org a few months ago, it was the perfect occasion to dig deeper into not only Divine’s image, but also how the company, and those that work for it, contribute to creating a more just world.

Sophi Tranchell works for Divine, the esteemed fair trade chocolate company based in the United Kingdom. She frequently turns to Ghana's Kuapa Kokoo cooperative, the nucleus of the business itself, for creative stimulation.

SocialBusiness.org interviewed Sophi Tranchell, the Managing Director of Divine Chocolate, and she touched on her past work in the anti-apartheid movement, as well as how she draws inspiration from Divine’s remarkable story.

Divine Chocolate was the brainchild of a group of cocoa farmers in Ghana who came together to form a cooperative in 1993, and who in 1997, voted at their AGM to set up their own chocolate company. This way they could access the higher value of the chocolate as well as just selling raw cocoa. In 1998, Divine was launched -- 33% owned by the cooperative Kuapa Kokoo. In 2007, The Body Shop, one of the original investors, handed over all their shares in Divine to Kuapa Kokoo -- giving the cooperative the lion’s share of the company. The other shareholders are Twin -- the NGO that helped Kuapa Kokoo organize and access the Fairtrade market -- and Oikocredit, an international development finance institute. The company is also supported by Comic Relief and Christian Aid.

I was working in the world cinema sector (including the Latin American Film Festival) before I joined Divine -- bringing foreign films to UK and creating a vibrant market for them. My personal interest and motivation has always been in working for social justice. I had an active role in the anti-apartheid movement, and have always supported Fairtrade. The opportunity to join Divine as Managing Director as the company just started out was a great chance to both actively champion fairer trade, and to apply the business and marketing skills developed with the film company. And it was a chocolate company! What's not to like?

From my first month with the company I have been travelling regularly to Ghana, to report to Kuapa Kokoo and immerse myself in the challenges and complexities of cocoa farming, trading and running a cooperative at a huge scale. The farmers of Kuapa Kokoo are a fantastic inspiration; they have taken the opportunity offered them by accessing the Fairtrade market and used it to make this dynamic organization flourish and be a leader in the cocoa industry. I'm also always inspired by all the people here in the UK who have gone out of their way to make Fairtrade work. They have been committed and passionate about Fairtrade; campaigning, lobbying and telling the farmers' stories to successfully grow the movement.

Not sure about rituals, but being creative has always been a necessity in Divine. When you're a small company making your way in an incredibly competitive and mature market, you need to think differently and constantly be looking for innovative ways to stand out and be noticed. We have an extraordinary story to tell -- and have also therefore been lucky that we've inspired many other creative people to get involved and apply their talents to getting Divine out there and loved. From my point of view, I think it is important to give yourself time and space to think and to let ideas come. I've also found it very productive to learn from others. For example, we've been part of the Wavelength forum where business leaders in both the social enterprise and corporate sectors share their experiences and ideas -- this has been really useful. You don't always have to re-invent the wheel; it is useful to be able to recognize other people's ideas that can be adapted to work for us. It's also been good to be able to turn to Ghana and Kuapa Kokoo for ideas -- using their thinking is more unusual in the UK context and helps Divine be distinctive.