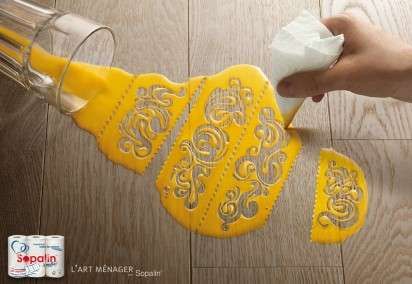 Meghan Young — November 22, 2011 — Marketing
References: leoburnett & ibelieveinadv
Share on Facebook Share on Twitter Share on LinkedIn Share on Pinterest
As the Sopalin 2011 ad campaign shows, cleaning can easily be considered an art form. From broomstick brushstrokes to paper towel paintings, as depicted in this particular campaign, men and women often put on their artist cap when tackling the cleanliness of their homes. Just like art, cleaning can be a therapeutic endeavor as well.

Conceived and executed by Leo Burnett, an ad agency based in St. Denis, France, the Sopalin 2011 ad campaign focuses on one of the most common uses for paper towels: sopping up spills. Thanks to photographer Olivier Foulon and illustrators Si Scott and Martin Sati, 'sopping' is turned into something more artistic. Although cleaning is often considered a chore, the Sopalin 2011 ad campaign shows it can be something more.
2.9
Score
Popularity
Activity
Freshness
Jeremy Gutsche Keynote Speaker