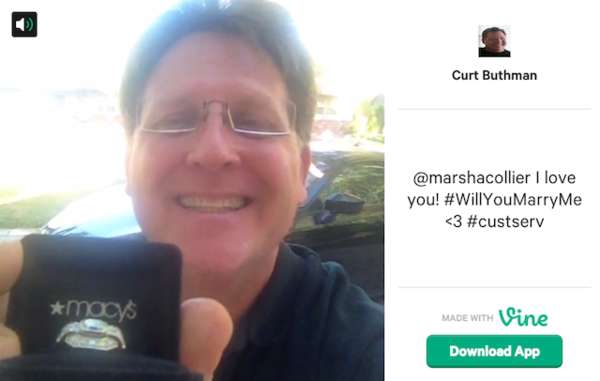 Laura McQuarrie — June 1, 2013 — Pop Culture
References: curtbuthman.sharedby.co & gizmodo
With so many people starting relationships online, it is no surprise that social media proposals are catching on as well. Curt Buthman and Marsha Collier met on Twitter, and Curt recently proposed to his girlfriend with a six-second Vine.

On May 28th, 2013, Curt tweeted his proposal video along with the hashtags: “WillYouMarryMe” and “custserv.” Although the second hashtag may seem unrelated and confusing, the tag was being monitored by Marsha during a live Twitter chat; of course, Marsha tweeted back a resounding “yes” in response.

Although this kind of proposal is not for everyone, the couple has a good attitude about it, and jokes that as a couple they only communicate in only 140 characters anyway.