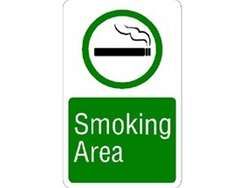 From IHT:
If Alexander Schoppmann is right, then where there's smoke, there's a flier. As more countries ban smoking in public places, his idea might seem malapropos. But Schoppmann, a German entrepreneur, is hoping to turn smokers' umbrage at ever-expanding efforts to stub out their habit into a highflying business proposal: Smoker's International Airways.

As the name suggests, the airline, known as Smintair for short, will probably not be for the faint of lung. The carrier, expected to begin luxury service with only business and first-class seats early next year, plans daily flights between Schoppmann's hometown of DÃ¼sseldorf and Tokyo - a 12-hour journey that, for some inveterate smokers, is simply not worth the nicotine-withdrawal headache. (INTERNATIONAL HERALD TRIBUNE)