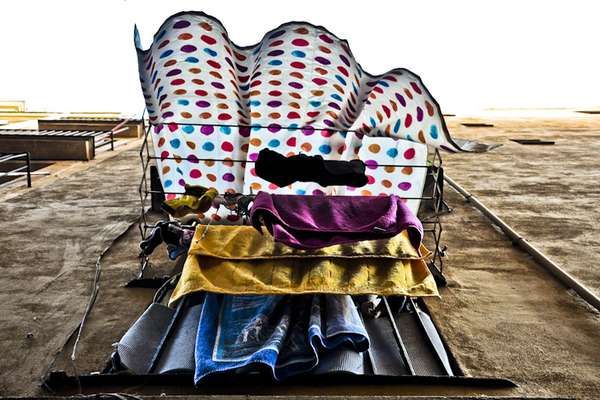 Ana Lopez — December 10, 2011 — Fashion
References: sivanaskayo & honestlywtf
Share on Facebook Share on Twitter Share on LinkedIn Share on Pinterest
Walking by the beautiful and traditional streets of places like Madrid and Barcelona is a unique experience, especially if they're adorned by the dancing moves of clothes outside balconies, as shown by the images captured by Sivan Askayo. This awesome project titled 'Intimacy Under the Wires' first started in Tel Aviv’s Jaffa neighborhood, but it has now taken a global step, as the Israeli photographer has visited places like Madrid, Barcelona, London, Florence, Venice and Buenos Aires.

This series is stunning as it shows with beauty and grace a long tradition. The contrast of colors created by the sky, the clothes and the buildings' facade is mesmerizing. Also, the artist does a fabulous job transmitting to viewers the movement of the garments floating in the wind. Another layer of beauty hidden in this photos is the concept of intimacy. For instance, being able to anonymously peek under women's skirts, or to share with the bystanders personal choices of clothes.

Intimacy Under the Wires by Sivan Askayo is an ode to intimacy and tradition, beauty and dance.
5.4
Score
Popularity
Activity
Freshness
Get the 2023 Trend Report FREE