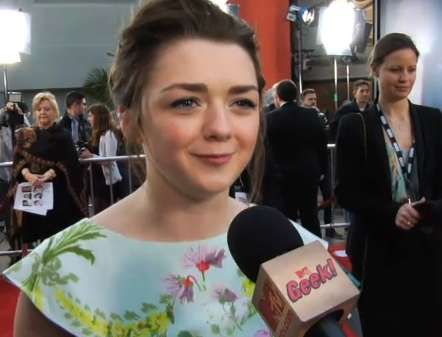 The Game of Thrones Cast Tries to Sing Their Theme Song

— June 30, 2013 — Pop Culture
References: mtv & laughingsquid
Share on Facebook Share on Twitter Share on LinkedIn Share on Pinterest
MTV Geek recently caught up with the cast of Game of Thrones and asked them to sing their theme song. Needless to say, the resulting video is both hilarious and a little bit painful to hear. While some of the actors, including Maisie Williams and Lena Headey did a good job, getting the gist of the tune's melody, several others might want to avoid a career in singing.

Titled 'Game of Thrones: The Musical,' this video shows some of the most loved and hated fantasy characters in the world in a more natural setting than Westeros, letting viewers see past their characters' traits and get to know the actors themselves. This is what makes MTV Geek's video truly entertaining; the viewer isn't watching the actors pretend to be other people, but are instead seeing the actors as they really are.

With season three of Game of Thrones finished, fans of the show are going through an intense withdrawal, especially at the thought of having to wait an entire year until the premiere of season four. This video, however, should hopefully keep that yearning at bay by letting fans singalong with their favorite characters to one of the most iconic theme songs of all time.
0.3
Score
Popularity
Activity
Freshness
Access Advisory Services