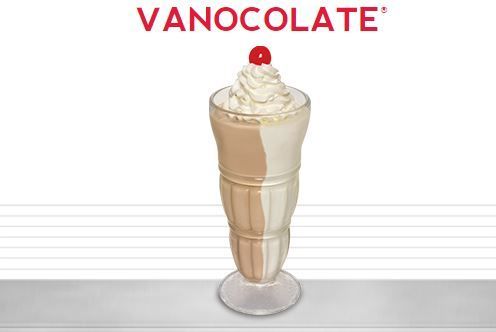 Joey Haar — November 7, 2016 — Lifestyle
References: steaknshake
Share on Facebook Share on Twitter Share on LinkedIn Share on Pinterest
Steak 'n Shake's 'Side by Side Milkshakes' stand out not because of the individual flavors out of which they're composed, but because of how the restaurant combines those flavors. As the name hints, the Side by Side Milkshakes are split down the middle with two standard shake flavors rather than blended together.

Steak 'n Shake offers four flavors of its Side by Side Milkshakes -- Strawnana, Banocolate, Strawnilla, and Vanocolate -- which are all visual portmanteaux of vanilla, strawberry, chocolate and banana shakes.

Beyond the aesthetic appeal of the milkshakes, which has the added bonus of making them social media-friendly, the vertical split between the shakes lets consumers drink them in whatever way they see fit. One might choose to drink the entirety of one flavor and then the entirety of the other, or while others are free to mix the shake flavors in whatever ratio pleases them.
1.6
Score
Popularity
Activity
Freshness
Access Advisory Services