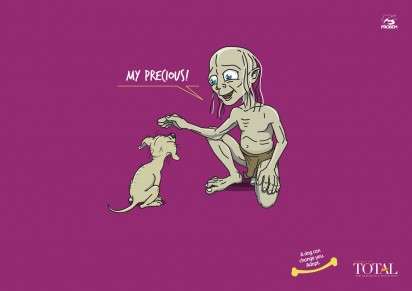 Meghan Young — October 21, 2011 — Marketing
References: shoppingtotal.br & ibelieveinadv
Share on Facebook Share on Twitter Share on LinkedIn Share on Pinterest
As much as a person can change the life of an unwanted animal, the Shopping Total ad campaign shows that a pet can change the life of their owner just as much, if not more. Of course, many are told that a woman can never change a man, so how can a pet do that? Well, pets are simply that exceptional and people are just human. The clever minds behind the Shopping Total ad campaign know the truth of it, that's for sure.

That said, the Shopping Total campaign was conceived and executed by Brazil-based ad agency G/PAC Comunicação Integrada. By using such infamous villain icons as Darth Vadar and Gollum, who are known for their one-track minds, Shopping Total illustrates the affect that an adopted pet can have on a person.
1.9
Score
Popularity
Activity
Freshness
Get the 2021 Trend Report FREE