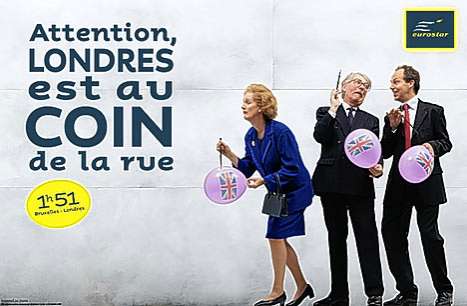 Camster M — November 20, 2007 — Marketing
References: news.sky
Share on Facebook Share on Twitter Share on LinkedIn Share on Pinterest
A new campaign that aims to promote travel to London depicts a rather cheeky skinhead, the Union Jack tattooed onto his back, relieving himself into a china teacup. The campaign for Eurostar's new high-speed train connection to London was created for the Belgian market, and posters have gone up in Antwerp, Brussels, Ghent, and Liege.

Eurostar love the ad, which was designed by a Belgian agency, and elieve it's great for British tourism. A spokesman called the concept â€œfun, and is supposed to show how cosmopolitan London is.â€ And yes, Belgians do get it, the spokesman insists. British tourism officials aren't complaining either.

Elliott Frisby of the British Tourist Authority, told Sky News, "Belgians think of themselves as closer to us than to France. They expect us to be quirky."

In addition to the skinhead ad, the campaign also has another ad, featuring John Cleese, Margaret Thatcher, and John Major, popping what appear to be balloons with the Union Jack on them.