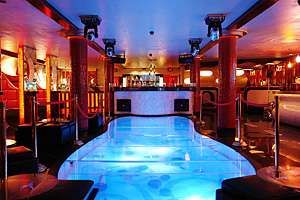 Bianca — March 24, 2008 — World
References: quaaustin
Share on Facebook Share on Twitter Share on LinkedIn Share on Pinterest
Qua Bottle Lounge has tapped into the obsession with extreme sports and exotic experiences involving wild animals. The Austin, Texas club found a way to bottle up and serve that adrenaline to their patrons on a nightly basis; beneath their glass dance floor is an aquarium filled with dangerous sea creatures including sharks and sting rays.

There's been a lot of controversial press regarding the sharks, which are kept in the 19,000 gallon tank, especially from animal rights organizations like PETA. The bar owners really have nothing to complain about though; the activists have helped the night spot get so much free publicity, creating buzz across the globe and spreading the word to those who would otherwise never have heard of the lounge.

It should be mentioned that PETA didn't just bash the club for being unethical like most protesters do; instead, they suggested an innovative alternative. They offered to help Qua find a group of attractive women to put on sexy mermaid shows instead each night.
6.3
Score
Popularity
Activity
Freshness
Jeremy Gutsche Keynote Speaker