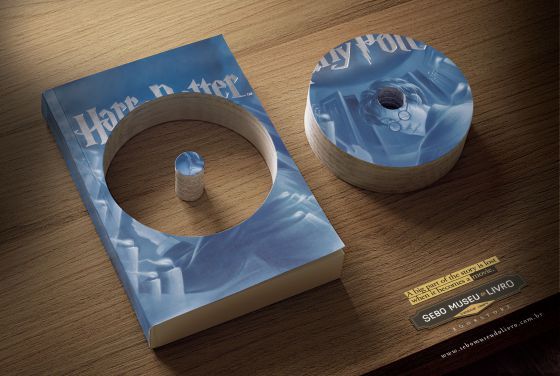 Laura McQuarrie — May 1, 2014 — Marketing
References: rockerheads.br & creativecriminals
If you'v ever watched the movie version of a book and felt a little cheated, these Sebo Museu Do Livro ads should speak to you. In just about the simplest way possible, the Brazil-based agency Rocker Heads devised a highly visual set of ads that shows that movie adaptations tend to take a huge chunks out of the story, which is literally shown by making DVD-shaped cutouts from novels. This is shown on popular book series that have been turned into films, including J.K. Rowling's Harry Potter and The Da Vinco Code by Dan Brown.

The ads for the Brazilian bookstore are incredibly simple and although the text isn't necessary to communicate its message, small wording at the bottom of the advertisements reads "A part of the story is lost when it becomes a movie."