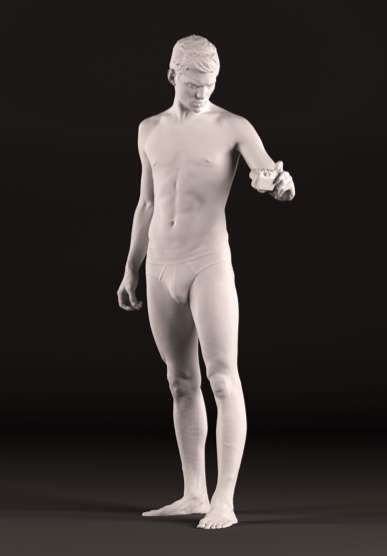 John Ibbitson — September 4, 2012 — Art & Design
References: indiegogo & stuartsandford
Share on Facebook Share on Twitter Share on LinkedIn Share on Pinterest
Male fashion icon Sebastian Sauvé is already known for his artistic endeavors outside of modeling for Fashion Week events and magazine editorials worldwide; the handsome, young model has produced his own work as a photographer with his ongoing series of prints that document his travels and give an insider's look into the world of high fashion. Is it any wonder then that for his next project, the model has teamed up with artist Stuart Sandford to create a piece that will immortalize his statuesque good looks in stone?

Well, sort of, anyway. Sandford is in the midst of creating a marble-like sculpture of the male model that will actually be composed of stainless steel in its final version and painted to look like a marble statue of the Greco-Roman era. Using Sebastian Sauvé, ranked as one of the top 50 male models in the industry and who is undeniably a current representation of masculinity, as his muse, Sandford not only demands attention to the beauty of the male form, but also elevates it to mythical proportions.

Inspired by statues such as Michelangelo’s 'David,' the artist intends for his modern-day version to be a contemporary fabrication of male beauty as it stands today. The completed work will be about roughly 8 feet in size and more information about the construction of this piece can be found on Sandford's website. In the meantime, if you would like to own your own version of the Sebastian Sauvé sculpture, limited-edition, smaller-scale replicas and other merchandise have also been created by the artist and are available for purchase to help fund this couture collaboration.
3.2
Score
Popularity
Activity
Freshness
Get Better and Faster