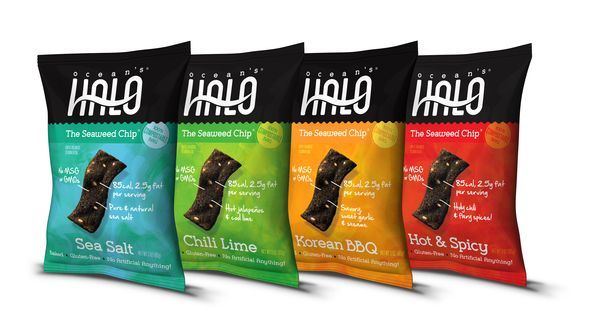 These Seaweed Chips Swim Against the Tide of Traditional Snacks

Mike Shim, one of four fathers to found the company, grew up snacking on seaweed, but realized that it often created a lot of waste. His principal co-founder, Robert Mock, was from Dallas, Texas—farther away from the ocean than Shim—and raised on tortilla chips. Talking over dinner one day about seaweed, the two came up with the idea of combining the two and creating a “friendly,” healthier form of a chip that was salty, crunchy and “had that great umami hit,” according to Shim.

The Seaweed Chips first hit store shelves in September 2013 in the San Francisco Bay area. The oceanic bites are packed with various minerals and vitamins. Each chip has a natural, dark colour with a S-shaped curvature, packing only 85 calories and 2.5 grams of fat per serving. Coming in four flavours—Chili Lime, Sea Salt, Korean BBQ and Hot and Spicy—the Seaweed Chips won the “Best of the Press” award at the 2013 Natural Products Expo East.
6
Score
Popularity
Activity
Freshness
Attend Future Festival