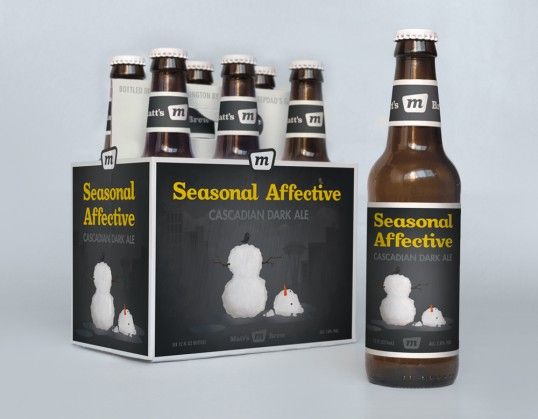 Seasonal Affective Beer Gets Its Identity from Gloomy Weather

Laura McQuarrie — May 22, 2014 — Lifestyle
References: jacksonwillits.me & lovelypackage
Seasonal Affective Cascadian Dark Ale is a beer produced by Seattle-based brewer Matt Flores that's branded to bask in the miserable wet weather of the Pacific Northwest. While Flores took care of the brewing, Jackson Willits developed the six pack's design and describes that the identity for Seasonal Affective comes from "somewhere between the classic WPA national parks posters and a New Yorker cartoon."

Although gloomy, the labels on the beer show a good sense of humor, stating that "You aren't cool. But your fridge is," as part of its suggested serving temperature. Despite looking gray and maybe even a little dismal, the Seasonal Affective beer has a charm to it that will warm the hearts of drinkers who know the pain of living in a rainy climate—with a sip, there might even be smiles to be had.
2.3
Score
Popularity
Activity
Freshness