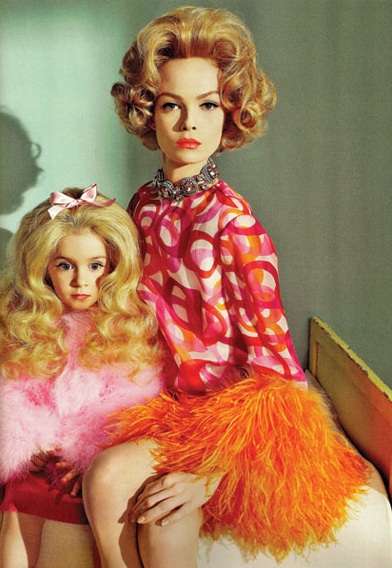 Model Siri Tollerod with her emotionless face, not only captures Joan Crawford’s look and style but that of a Stepford Wife—though Ms. Crawford was far from an obedient, humble, servant wife.  The child modeling with Tollerod in Numero Magazine’s Mommie Dearest shoot is the spitting image of Christina Crawford—she also resembles actress Diana Scarwid, as a child, who played Christina in the movie Mommie Dearest starring Faye Dunaway as Joan Crawford.

Tollerod cutting up a teddy bear, though not anything close to beating a child with a hanger, brings to mind a cold and cruel mother.  And, as if that isn’t scary enough, Numero also photographs her with a couple images that frighten even adults, a wooden dummy and some horrific looking clowns.

Joan Crawford and scary images aside, Numero Magazine captured the essence of retro hair and clothing styles in their Mommie Dearest photo shoot and did a fantastic job in doing so.

Still in need of a Halloween costume?  Photos from Numero Magazine’s Mommie Dearest shoot should give you a few ideas.  Any of these looks would make for one heck of a haunting Halloween costume.
4.1
Score
Popularity
Activity
Freshness
Get Better and Faster