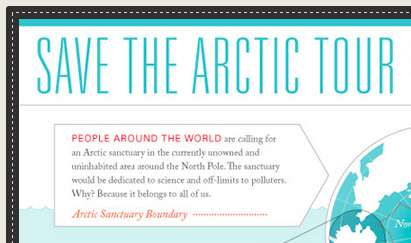 Greenpeace's 'Save the Arctic Tour' Infographic Examines State of the Ice

Jennifer Gosnell — June 6, 2013 — World
References: greenpeace.org & columnfivemedia
Share on Facebook Share on Twitter Share on LinkedIn Share on Pinterest
Greenpeace's 'Save the Arctic Tour' infographic takes a cold, hard look at the state of the Arctic and it's melting glaciers. Oil giants, such as Shell and Gazprom, a Russian oil company, are threatening the state of our waters and the creatures within them, such as polar bears and whales. Their habitat is significant and affects the whole world. If the arctic is going to change, changes will be coming to the rest of the world as well.

This 'Save the Arctic Tour' infographic does an interesting job in following the effects of oil spills of the past that are still very much present today, such as the Prince William Sound spill 23 years ago by Exxon Valdez. Greenpeace's infographic points out some of the most critical elements to understanding the Arctic's concerns.
0.5
Score
Popularity
Activity
Freshness
Get the 2021 Trend Report FREE