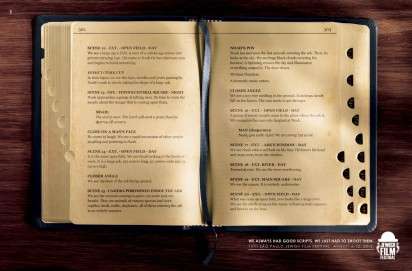 Meghan Young — August 14, 2012 — Marketing
References: yr & ibelieveinadv
Share on Facebook Share on Twitter Share on LinkedIn Share on Pinterest
At first glance, the Sao Paolo Jewish Film Festival ad campaign seems to simply be a shot of biblical scripture. Upon closer inspection, however, the scripture has been converted into a script--a film script to be exact. Not only are the print ads a play on the religious nature of this particular culture, they also read, "We always had good scripts. We just had to shoot them." Essentially, it shows that filmmaking is in their blood.