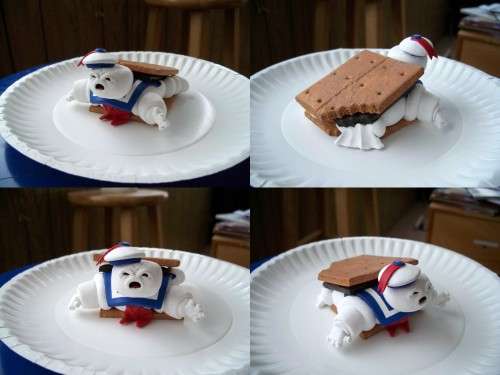 Meghan Young — May 17, 2011 — Lifestyle
References: reddit & neatorama
Share on Facebook Share on Twitter Share on LinkedIn Share on Pinterest
The S'more Puft is probably one of the greatest (if not THE greatest) s'more creation I have ever come across. Unfortunately, it's not actually a s'more, though it looks very convincing. Instead of being made of marshmallows, graham crackers and chocolate, this entire dessert was made out of modeling clay. That doesn't mean I still don't want to bite a big chunk out of it, of course.

Created by redditor SirCreate, the S'more Puft also looks so realistic, it might actually spur someone to call 'The Ghostbusters.' It also looks so good that it will inspire some crafty baker to attempt to recreate a real, edible S'more Puft treat. I know I would pay good money for it and I'm sure you would too.
1.8
Score
Popularity
Activity
Freshness
Attend Future Festival