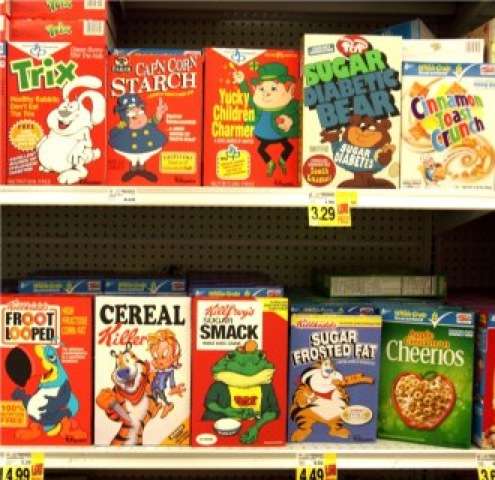 Susan Keefe — October 14, 2011 — Art & Design
References: popaganda & foodista
Share on Facebook Share on Twitter Share on LinkedIn Share on Pinterest
The Pop artist Ron English is known for manipulating the cozy image of beloved convenience food mascots in order to show their true colors. Over the past several decades, nutritionists have been warning against the evils of high-fructose corn syrup, trans fats and other fun chemicals designed to make you bloat in record time. What is most disturbing is throughout the 80s and 90s, the foods that contained the highest amounts of these nutritional no-nos were marketed directly towards children. Most people from my generation can easily recall a plethora of sugary cereal commercials. The tag lines from these ads have even worked their way into modern day slang.

Ron English hopes to reach the naive consumer who, almost without thinking, reaches for their usual box of breakfast sugar. He hopes to achieve this by startling them out of their complacent dietary routine. Placed strategically on grocery shelves throughout the United States, English has designed a more truthful take on your morning meal. Boxes bearing obese versions of your favorite cereal mascots attempt to hack famous cereals under reworked titles like, 'Cap'n Corn Starch,' 'Sugar Diabetic Bear' and the priceless 'Sugar Frosted Fat' -- you can't get much more direct than that.

If you happen to find one of these altered boxes while you're wandering the isles of your local grocery store, send it to Ron English and he'll send it back signed. Sure to inject a little educational fun into a mundane and necessary task, these hacked cereal boxes with make you think twice about the choices you make at the grocery store.
1.2
Score
Popularity
Activity
Freshness
Get Better and Faster