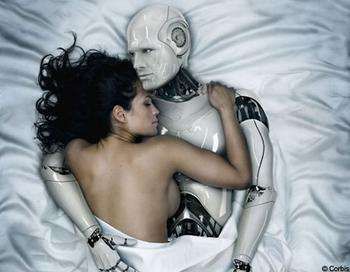 Jessica Marcel — September 19, 2009 — Naughty
References: sodahead & guardian
Share on Facebook Share on Twitter Share on LinkedIn Share on Pinterest
Sex robots seem like something straight out of sci-fi, but AI scientist David Levy says they could be coming soon to a bed near you. “Real Dolls” and, well, blow-up dolls have been around for a long time, but now Levy says there may lie an opportunity in combining artificial intelligence with the advanced mechanical technology.

Sex robots have gotten David Levy a lot of press attention. Levy is the winner of the 2009 Loebner Prize—his winning creation was a human-like “chatbot.” The chatbot is capable of holding simple conversations and responding to human feedback. The test given to this technology, known as the Turing test, is to be able to fool a judge in a five minute text (keyboard-based) conversation. The chatbot passes if the judge can’t discern if they’re chatting with a human or a machine.

“There will be a huge amount of publicity when products like this hit the market. As soon as the media starts writing about ‘My fantastic weekend with a sex doll,’ it will be like the iPhone all over again, but the queues will be longer,” says David Levy.

So, sex robots: combining the technological advances of AI with the mechanical form to create a robot that doesn’t just respond physically, it carries on a conversation. David Levy sees a market. Creepy or the next step in escort services? Maybe both.
6.8
Score
Popularity
Activity
Freshness
View Innovation Webinars

Bridal Robots
The HRP-4C Unit Walked Down the Aisle on a Runway in Osaka, Japan