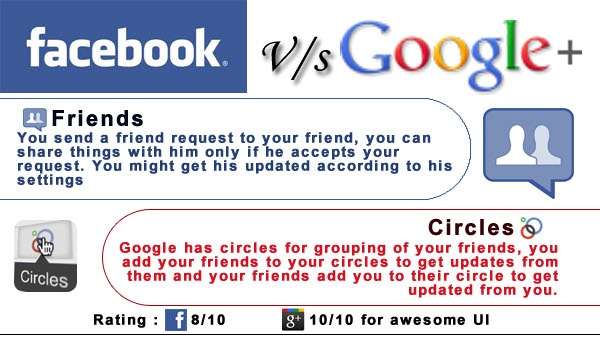 The Rise of Google Plus Infographic Charts Parallels it to Facebook

Corinne Guirgis — August 2, 2011 — Social Media
References: thetechaddicts & dailyinfographic
Share on Facebook Share on Twitter Share on LinkedIn Share on Pinterest
If you're still a bit on edge about the rumored takeover of Google+ of Facebook, this Rise of Google Plus Infographic can certainly answer your questions. The social networking rivals are similar in concept, and while there are advantages and disadvantages to both, many Facebook fanatics are skeptical about the new network's ability to overpower the seemingly unbeatable website that revolutionized the way humans interact with each other.

The rise of Google's new project has Facebook installing some new features like video chat, which is powered by Microsoft Skype. In any case, this infographic by The Tech Addicts breaks down the similarities and differences between both networks in a way that is easy to understand.

Implications - The global significance of Facebook is something indisputable to consumers and companies alike. While most are of the belief that it can never become irrelevant, emerging social networks with the potential to extend the boundaries of Internet socializing are raising questions as to Facebook's permanent citizenship and role on the web.
6.1
Score
Popularity
Activity
Freshness
Attend Future Festival