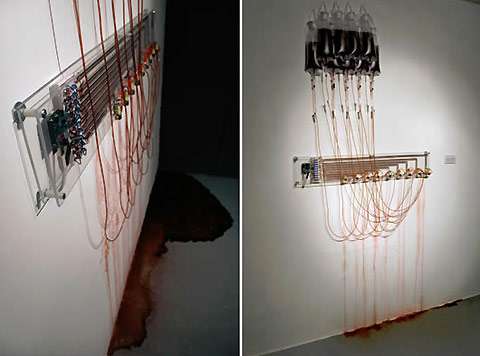 Meghan Young — April 12, 2011 — Tech
References: rileyharmon & lostateminor
As the gaming community becomes more and more immersed in lifelike video games, it's easy to forget what's real and what's not; Riley Harmon blurs the line even more with these featured works. His interactive installation titled 'What It Is Without the Hand That Wields It' (inspired by the Telefon Tel Aviv song of the same name) actually spurts blood every time a player in the video game Counter-Strike dies.

Based in Pittsburgh, Riley Harmon purpose is to show how "mediated experiences of killing change our perception of authentic violence and death." Although some may deny these effects, video games often do encourage a violent lifestyle, and Riley Harmon's sculpture brings to light the consequences of such encouragement.