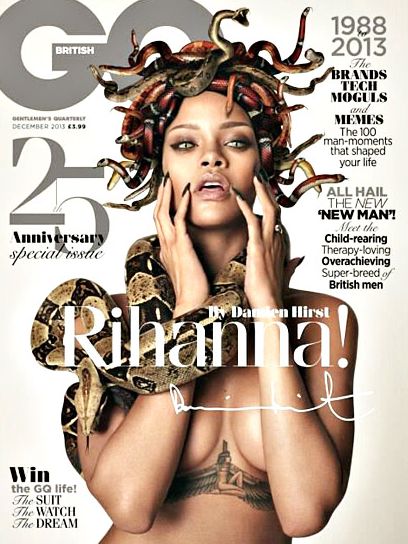 Laura McQuarrie — October 27, 2013 — Pop Culture
References: instagram & style.mtv
This Rihanna GQ Magazine cover features the popstar clad in almost nothing but snakes. In the image, Rihanna wears a regal snake of crowns that is reminiscent of Medusa and adds even more reptilian elements like creepy contacts that give her tall, thin pupils. The striking image is used for GQ’s special 25th anniversary edition and it is certainly an attention-grabbing one.

Rihanna shared even more images from the shoot on her Instagram account, revealing images of the same nature — wearing very little but snakes. In one of the full body images, she wears an undergarment which has a scale-like pattern and a heel which has a bit of a wave to it, which looks just like a snake’s tail. This would be a terrifying photoshoot for some, so Rihanna seriously deserves some credit for selling the snake theme so well.
2.1
Score
Popularity
Activity
Freshness