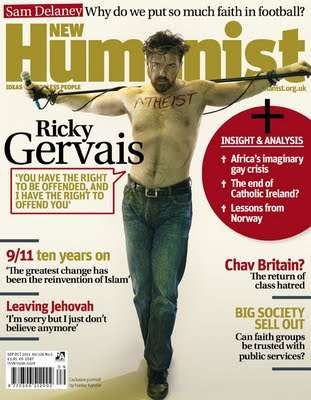 Souzan Michael — August 23, 2011 — Pop Culture
References: patheos & buzzfeed
Share on Facebook Share on Twitter Share on LinkedIn Share on Pinterest
Ricky Gervais is not the type of comedian, or celebrity for that matter, who is afraid of appearing offensive or stirring up some controversy, and the Ricky Gervais New Humanist September 2011 cover is a perfect example of that fearlessness.

Gervais originally sent in a photo of himself to Rolling Stone Magazine dressed as a clown with a gun in his mouth. He intended to send them this one as well, which shows the comedian hanging on a crucifix made of a microphone stand and the word 'atheist' written across his chest.