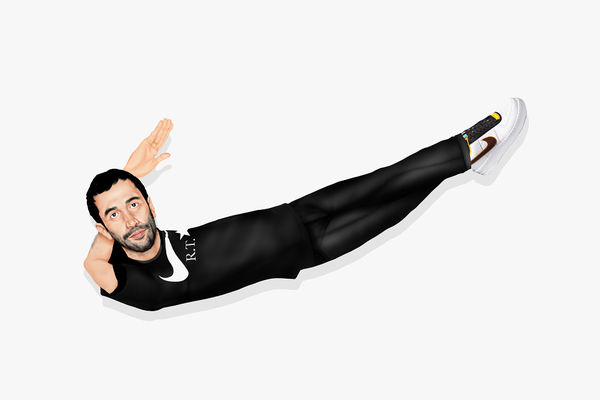 Megan Facciuolo — March 18, 2014 — Fashion
References: mikefrederiqo & highsnobiety
Dutch illustrator Mike Frederiqo has been known to create humanized logos, and this time around ,he presents the Riccardo Tisci Nike Swoosh. Riccardo is a well-known creative director for Givenchy. Following months of speculation, he recently unveiled his collaboration with Nike. This illustration definitely proves just how involved with the brand he is.

The image of the Italian designer in a black Nike tee is realistic, as it is based on an picture of him that hit the Internet in January when the collaborative was announced. He is donning an all-black ensemble, except for his white Air Force 1s. His collection of sneakers are to release on March 21 in select stores throughout Europe.

Frederiqo has sold his illustrations by printing them on t-shirts in the past, and I'm hoping he does the same with this project.