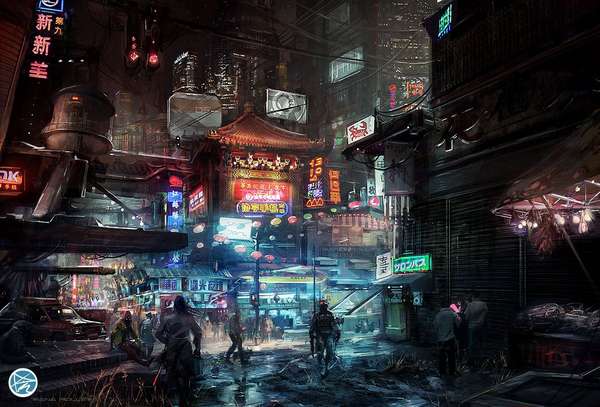 Jason Soy — December 30, 2011 — Art & Design
References: fealasy.deviantart & brok-lee.tumblr
Share on Facebook Share on Twitter Share on LinkedIn Share on Pinterest
If something can in fact be simultaneously hopeful and bleak, it’s these Riana Moller renderings of futuristic cityscapes. It’s hopeful in that plenty of technological advancements seem to have been made in Moller’s version of the future, which is also stunning visually due to its vibrant color displays. But alas, these depictions are also bleak as they portray the future as having similar pollution problems as modern day societies, as well as an increased abundance of deadly weaponry on city streets. For a singular artist to be able to conceive of such vivid images speaks greatly of how talented Moller truly is.

Riana Moller, who also illustrates under the name Fealasy, is a Denmark-based digital artist. She streams herself creating these masterpieces regularly on Thursdays, so those looking to improve their art skills can watch and learn through imitation.
3.7
Score
Popularity
Activity
Freshness
Attend Future Festival