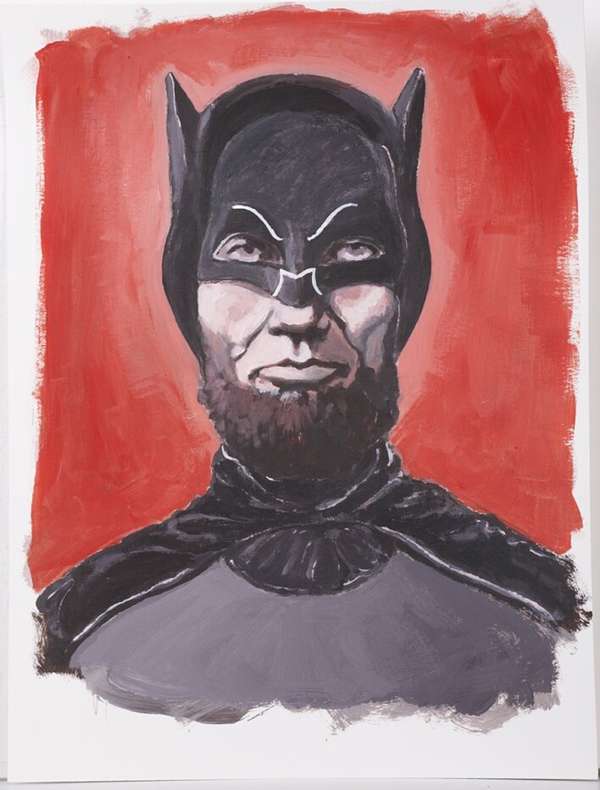 Marie C. Hudson — July 25, 2011 — Naughty
References: retoyman.blogspot & theworkmag
Share on Facebook Share on Twitter Share on LinkedIn Share on Pinterest
The line between superhero and political powerhouse is blurred in the new Retoyman 'Superheroes' art, featured in Work Magazine's 'Manipulation' Issue. The paintings depict Abraham Lincoln as Batman, and also show imaginary situations where he and Wonder Woman, as well as Batgirl, are in a relationship. The mashups comment on how significant these figures are to American society, and present Lincoln as a masked crusader of human rights. Other paintings are slightly more risque, showing the attraction and lust for powerful figures, whether they be imagined comic heroes or Presidents.

The Retoyman 'Superheroes' art asks the viewer to question what makes a person a true superhero, and is a refreshing interpretation on the term. These bold creations push the envelope on how political figures and comic book stars are usually presented.
4.9
Score
Popularity
Activity
Freshness
Jeremy Gutsche Keynote Speaker

Presidential Portrait Dresses
The Obama Dress is a Crime Against Fashion