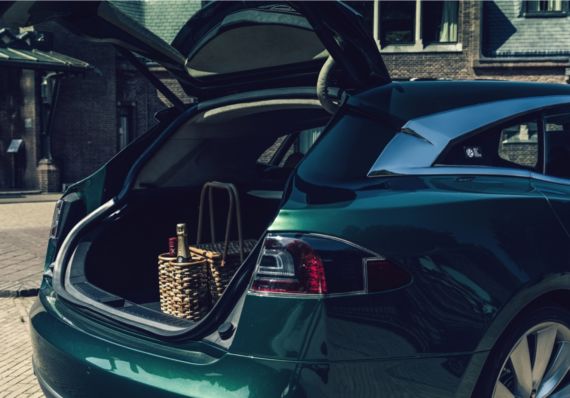 Justin Lam — June 5, 2018 — Autos
References: cleantechnica & uncrate
The RemetzCar Tesla Model S Shooting Brake is a custom hatchback that looks to expand the models offered by the automaker by creating an electric sedan version. Built on the Tesla Model S, RemetzCar stripped the original vehicle down to its skeleton and crafted a fully aluminum conversion. This included new C-pillars and a reshaped roof, as well as a third brake light and modified window seals. Of course, the most striking design of the RemetzCar Tesla is the hatchback design, as Tesla has yet to produce a car in this style.

The inspiration for this car's design came from a Model S hearse built by RemetzCar and this new hatchback design was brought forward by Floris de Raadt. The vehicle will be produced in a limited run of 20 units and will make its official debut at the International Concours d'Élégance Paleis Het Loo in Apeldoorn, The Netherlands.