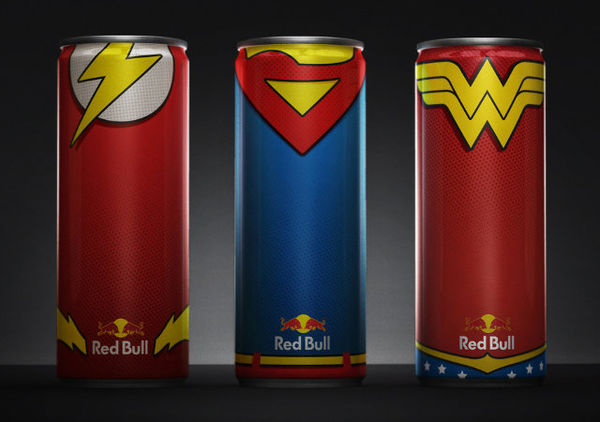 Megan Facciuolo — March 10, 2014 — Art & Design
References: diego-fonseca & walyou
Share on Facebook Share on Twitter Share on LinkedIn Share on Pinterest
Red Bull may "give you wings" but it may also be the reason behind superpowers (I always knew there was better reasoning behind Superman's flying powers and The Flash's speed)! All jokes aside, reputable New York-based Art Director Diego Fonseca has revealed his latest work called, 'Red Bull Superheroes.'

He has designed the exterior of the popular energizing drink in the likes of his six favorite DC Comics Superheroes: Batman, Robin, Superman, Wonder Woman, The Flash, Aquaman, and The Green Lantern. The familiar tall slim cans now feature the iconic superheroes' uniforms in this conceptual project. It is too bad the project is only "conceptual" because the cans truly rock!

They could give a whole new marketing campaign to Red Bull -- one could only hope that the brand picks it up!
5.1
Score
Popularity
Activity
Freshness
Get the 2021 Trend Report FREE