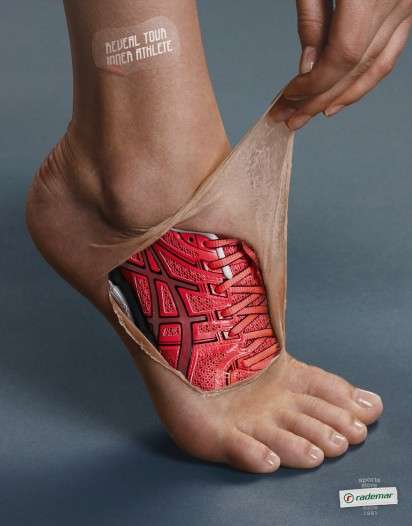 The Rademar Campaign Sends a Positive Yet Gruesome Message

Meghan Young — July 9, 2013 — Naughty
References: rademar.ee & ibelieveinadv
Share on Facebook Share on Twitter Share on LinkedIn Share on Pinterest
The Rademar campaign might be more than a little disturbing, but the imagery gets its point across loud and clear. The models surreally pull back their skin to reveal running shoes and other sportswear underneath. The print ads read, "Reveal your inner athlete." Going for a bit of shock value, the clever concept will surely capture people's attention instantly.

Conceived and executed by Tabasco, an ad agency based in Tallinn, Estonia, the Rademar campaign was art directed by Kerstin Raidma with creative direction by Indrek Viiderfeld, illustrations by Kerstin Raidma and photography by Kalle Veesaar. Focusing entirely on the ripping of flesh, it really shows how much people are gravitating towards the gruesome, as evidenced by the increasing number of zombie, vampire and other monster movies and shows.