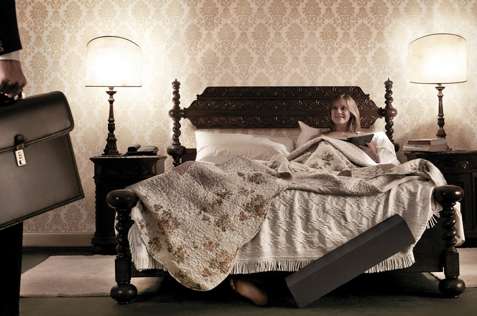 Amelia Roblin — March 12, 2011 — Pop Culture
References: r7 & adsoftheworld
Share on Facebook Share on Twitter Share on LinkedIn Share on Pinterest
I'd never thought of a low dash inconveniencing my life in such a ridiculous way, but the R7.com Underscore campaign truly offers a clever take. The website is offering email addresses with thousands of available logins, so if you're lucky, you won't needs to tack your birthday and month or an underscore onto your online identity.

Bringing a simple computer character into the real world, the Babel advertising agency of São Paulo, Brazil depicts two amusing situations where one would not like to have a low line attached to, say, his foot. Causing unintentional footsies under the table, or giving away a lover's hiding place under the bed, the witty R7.com Underscore campaign makes Internet users think twice about the silliness of such an otherwise redundant bit of text.
4.9
Score
Popularity
Activity
Freshness
Get Trend Hunter Dashboard