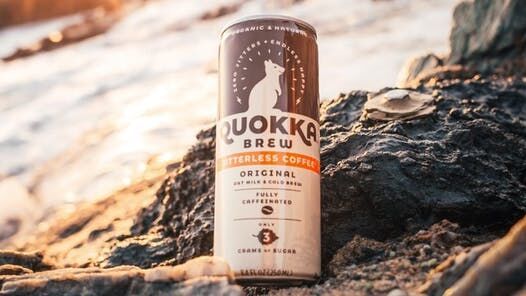 Laura McQuarrie — July 23, 2020 — Lifestyle
References: indiegogo & producthunt
Share on Facebook Share on Twitter Share on LinkedIn Share on Pinterest
Quokka Brew now introducing itself to the world on Indiegogo as "the market’s first caffeinated Jitterless Coffee," as it boasts a patent-pending blend that combines organic amino acids and brain-boosting nootropic ingredients. While a handful of brands are now offering canned coffee beverages with a splash of plant milk, Quokka Brew goes above and beyond by offering ingredients to counteract the undesirable side effects of consuming caffeine.

The beverage remains as energizing as ever but it helps to eliminate the crash and the jitters that often come with drinking a strong cup of coffee. At the base of the beverage, there's a fair trade cold brew coffee, exotic vanilla from Madagascar and a blend of six key ingredients to support peak performance without feeling depleted shortly afterward.