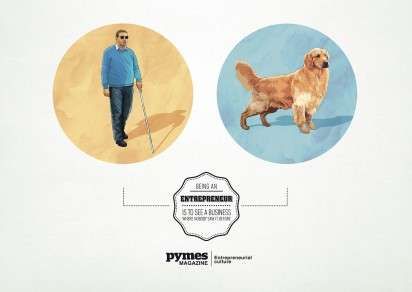 Meghan Young — April 18, 2013 — Marketing
References: ibelieveinadv
Share on Facebook Share on Twitter Share on LinkedIn Share on Pinterest
It is not everyday that a person has a successful business idea epiphany, so the Pymes Magazine campaign steps in with some helpful hints, one of which is used for its tag line. It reads, “Being an entrepreneur is to see a business where nobody saw it before.” This statement is illustrated through strange pairings including a visually impaired individual with a dog and grapes with feet. They may be natural occurrences now, but the initial connection must have mystified many.