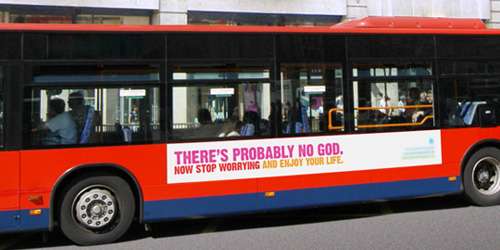 Donations could be made online and Professor Richard Dawkins, bestselling author of The God Delusion, generously agreed to match the donations. As the campaign raised £5,500, his donation helped bring the campaign total to £11,000.

All donations are managed by The British Humanist Association. The aim of the project is to brighten people's days and raise awareness of atheism in the UK.

It was a great project as it was, but it was even more incredible that they raised the cash in just one hour and six minutes. They are now planning to advertise inside the buses as well.

68 Examples of Guerrilla Marketing
Literally to Metaphorically, Because Everyone Loves a Guerrilla