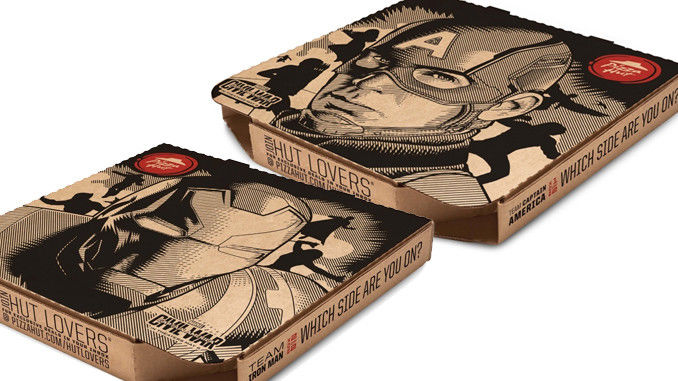 These Promotion Pizza Boxes Mark the Release of an Upcoming Film

Katherine Pendrill — April 22, 2016 — Marketing
References: pizzahutus & chewboom
Share on Facebook Share on Twitter Share on LinkedIn Share on Pinterest
Pizza Hut recently teamed up with Marvel to create a series of promotional pizza boxes for the upcoming release of 'Captain America: Civil War.' While it is not unusual for restaurant chains to promote new films, the latest Pizza Hut campaign consists of limited-edition boxes instead of a new menu item.

The promotional pizza boxes celebrate the release of the new Captain America movie with images of Iron Man and Captain America. The two different boxes reflect the theme of the movie, which is about picking sides and choosing between characters. However, as Pizza Hut's Vice President of Marketing Jared Drinkwater explains, "at Pizza Hut, we know picking sides doesn’t have to lead to an all-out battle."

To go along with the new boxes, Pizza Hut and Marvel have also created a digital hub that gives fans access to exclusive film content, such never-before-scene clips and a quiz that reveals which side to root for.
4.1
Score
Popularity
Activity
Freshness
Jeremy Gutsche Keynote Speaker