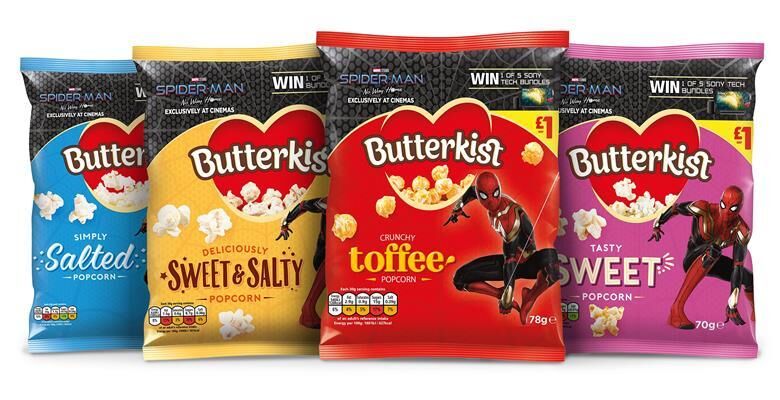 The promotion will see specially marked packs emblazoned with the superhero himself and will offer shoppers the chance to win some big ticket prizes. This includes one of five Sony tech packages that include a Sony Bravia 65-inch smart TV along with a Sony All-One Sound Bar and Sony headphones.

Marketing Director at KP Snacks Kevin McNair commented on the new Butterkist on-pack promotion saying, "The new Butterkist promotion aims to capitalise on the growth of popcorn sharing occasions. The promotion is perfectly positioned to disrupt shoppers, broaden Butterkist’s appeal and bring new shoppers to the category. Driving category penetration by focusing on the fun and excitement of a big theatrical release, a well-loved character and the opportunity to win big prizes, the campaign creates a valuable opportunity for retailers to drive growth in popcorn. We are proud to team up with Sony Pictures on an immensely successful film franchise to drive further penetration in the popcorn category. The strong appeal of a Spider-Man movie, excellent prizes and the great taste of Butterkist popcorn will drive sales of the new promotional packs, with retailers benefiting from the excitement of consumers.”
7.3
Score
Popularity
Activity
Freshness
View Innovation Webinars