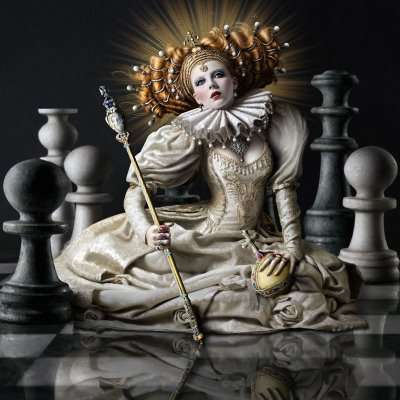 Among those powerful women is Queen Elizabeth I of England, who is depicted in all her regal glory surrounded by chess pieces.

Next comes the guillotined Queen of France Marie Antoinette, who was known for her extravagance and the phrase “Let them eat cake,” attributed to her in reference to her hungry and impoverished subjects. She is shown surrounded by all the pomp, circumstance and decadence of pre-revolutionary France.

Meanwhile, the tragic Queen Cleopatra of Egypt is displayed in a very erotically-charged pose surrounded by snakes.

The other women in the gallery in order of appearance are:

4. Elizabeth Bathory of Hungary, one of the most prolific serial killers in history

5. Christina of Sweden, the Androgynous Queen

6. Olympias the mother of Alexander the Great

7. Eleanor of Aquitane, Queen of England and mother of Richard the Lionhearted