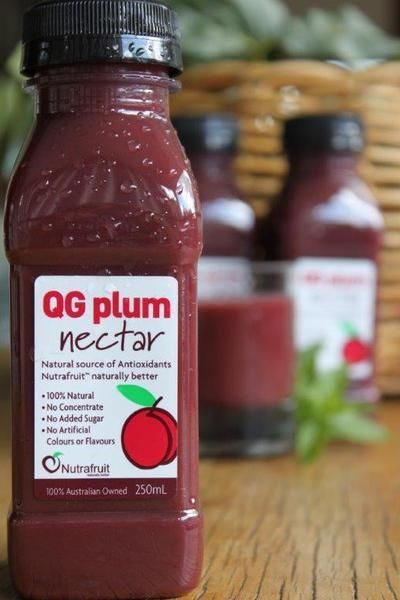 Laura McQuarrie — June 29, 2017 — Lifestyle
References: nutrafruit.au & trndmonitor
Share on Facebook Share on Twitter Share on LinkedIn Share on Pinterest
This antioxidant-rich plum nectar from Nutrafruit is bottled like a beverage as it can be consumed straight out of the bottle, or mixed into mineral water, as well as drizzled over snacks like yogurt and ice cream for added flavor and health benefits. The plant-based nectar is made entirely from the Queen Garnet plum, boasting no added sugars, preservatives, colors or flavors.

In comparison to blueberries, the plum used to make this nourishing nectar boasts three to six times the antioxidant content. As well as being revered for its high antioxidant content, the Australian Queen Garnet plum is being researched for the benefits it has for those suffering from high blood pressure, heart disease, obesity, dementia and other diseases.

Alongside its Queen Garnet Nectar, Nutrafruit also makes a probiotic power that features the superfood as a star ingredient.
2.4
Score
Popularity
Activity
Freshness
Get the 2021 Trend Report FREE