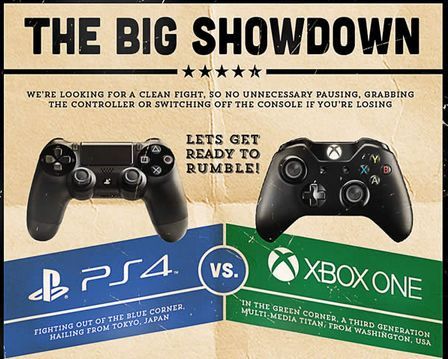 The Playstation vs Xbox Infographic Picks Out Winning Features

Laura McQuarrie — November 13, 2013 — Tech
References: blog.xpango & dailyinfographic
Share on Facebook Share on Twitter Share on LinkedIn Share on Pinterest
'The Big Showdown' infographic pits Playstation vs Xbox, putting these gaming systems head-to-head in several categories. With the new PS4 is set for release on November 15th and the Xbox One coming out on November 22nd, there will soon be a new generation of gaming consoles on the market and this infographic should provide some insight as to which you should purchase.

The graphic breaks down the comparison into several rounds comparing tech specs, design, controllers, online gaming and voice controls. Although there isn't a clear winner between the Playstation vs Xbox, both of these gaming systems having certain winning features.

The Xpango graphic determines that in terms of technical specifications, the PS4 takes the cake with its 1.6 GHz and 8 core processor, while the Xbox One boasts a sleek new controller with over 40 new improvements.